STORY OF A MAN… 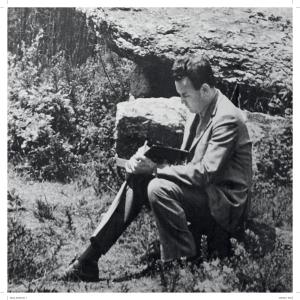 Yves Rocher. The name is world famous, yet everything started for him and his brand in a small village of character, La Gacilly.

Indeed, Yves Rocher was born on April 7, 1930 in the village of La Gacilly. He spent his childhood alongside his father, a hatmaker, whose love of nature he shared. Having a fragile health, his parents prefer to educate him at home and his places of recreation will be Les Landes de La Gacilly and the forest of Brocéliande.

It was at the sudden death of his father, at the age of 14, that Yves Rocher took refuge in nature where he drew a certain comfort and discovered the amazing powers of the plant world.

Following a meeting with a healer, he learned the recipe for an ointment made from black cohosh. He then decided to make it by hand in the family attic and to sell it directly to the users, through classified ads.

The beauty and care products by plants will be the pillars of the cosmetic products company that he founded in 1959. 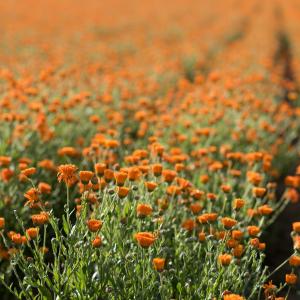 10 years later, it was in La Gacilly, that Yves Rocher decided to open its first industrial site with the Croix des Archers factory (body care), and its first store in Paris, on Boulevard Haussmann.

Very attached to its territory, it also wished to maintain a cultivation activity with nearly 55 hectares of organic fields near its native village of La Gacilly. 8 plants are cultivated in agroecology: cornflower, Roman chamomile, matricaria chamomile, arnica, calendula, edulis, ice ficoid and mint, which are used in the composition of Yves Rocher products.

He died on December 26, 2009 of a stroke and is buried in the cemetery of his native village.

Today, his grandson Bris Rocher is the president of the family business. His second son Daniel created the Daniel Jouvance brand and Jacques Rocher is in charge of the Yves Rocher Foundation.

A LINK WITH HIS TERRITORY… 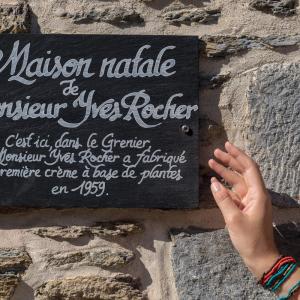 While continuing his professional activities, Yves Rocher became mayor of La Gacilly in 1962, until 2008. He was also a general councilor of Morbihan and then a regional councilor.

His native village, as well as the surrounding villages, benefit from the economic activity of the Yves Rocher company.

Many infrastructures were set up under his impetus:
– The Botanical Garden, a 2ha strolling area with 1,500 species, including plants used in Yves Rocher cosmetics and perfumery and created in 1975 by Mr. Rocher.
– The Yves Rocher House with its immersive museum, restaurant and boutique
– The La Grée des Landes Spa Eco-Hotel and its restaurant
– The largest Photo Festival in Europe with a course of more than 1000 photos.

Craftsmen in La Gacilly and the surrounding area
In La Gacilly and its surroundings, arts and crafts are more than present! Dozens of workshops open their doors to you.
Read more
La Gacilly
Home of Yves Rocher, host of the Photo Festival and rich of its art craftsmen, La Gacilly offers a warm and exotic break to its visitors.
Read more
The castle of Josselin
The castle of Josselin is a must-see in Brittany and fits perfectly into the small city of character.
Lake of Tremelin
Need to air your mind, to cut yourself off from everyday life, to take the kids out or to bubble in the forest ? Direction Le Lac de Trémelin !
The forest of Broceliande
Find here everything you need to know about the forest of Broceliande. Legends, practical information and guided walks are just a click away!
The Médréac train station
Take a leap in time and discover the old station of Médréac. Immerse yourself in the atmosphere of a late 19th and early 20th century station!
The Round Table of Knights
The Round Table of Knights is a work of art created by Mickaël Thomazo
Malestroit, the pearl of the Oust
Discover the one nicknamed "The Pearl of the Oust": Malestroit, the warm, medieval and authentic small city of character.
the Gardens of Broceliande
At the gates of the forest, explore the 24 hectares of greenery of the Gardens of Broceliande: plant collections, sensory trails and fun activities...
Menhirs of Monteneuf
More than 400 menhirs are waiting for you to discover their secret by strolling around them and touching them with your fingertips. Wonderment guaranteed!
Montfort-sur-Meu
A stone's throw from the Breton capital, Montfort-sur-Meu has preserved its cobbled streets, half-timbered houses, purple schist residences and the medieval remains of the...
The world of the Scrap Metal Poet
The universe of the Poète Ferrailleur is an enchanting place, a place where dozens of offbeat and ingenious objects come alive, rustle and dance.
Josselin, a thousand year old city
At the foot of the Nantes-Brest canal, Josselin is a Breton must-see. Remarkable castle, basilica, medieval streets, a city of character.
Lac au duc
The Lac au Duc offers a wide range of activities: golf, boating, hiking, biking, fishing, hydrangea circuit, games for children...
from. €
..
.
.
.
Close